A traditional Christmas dessert served in France is the Buche de Noel, or yule log.

Nearly every patisserie in the City of Light offers up their own version of this delicious rolled cake, with some of the most elaborate—and most pricey—coming from such celebrated pastry chefs, chocolatiers and patisseries as Pierre Herme, Laurent Duchene, Christophe Roussel, Jean-Paul Hevin, Dalloyau, Laduree and many more. The dessert Buche de Noel is derived from the ancient annual custom of burning a yule log to mark the Winter Solstice and to bring good luck for the coming longer days—particularly in terms of bountiful harvests. These ceremonial wooden logs were adorned with such symbols of health and prosperity as holly, pine cones and ivy.

After being burned, the log’s ashes were kept for the remainder of the year as part of the good luck charm. The practice of burning a yule log dates from as far back as the 6th century and only fell out of favor in the early 20th century when most modern homes relied on coal furnaces and not wood-burning fireplaces for warmth. At this point, the yule log custom morphed into eating a dessert version of the good-luck talisman.

Today, you can buy a Buche de Noel from virtually any pastry shop in Paris—or throughout France, for that matter. Many families, however, have made it a tradition to bake their own yule logs as part of their annual Christmas celebrations. A basic Buche de Noel is a thin yellow sponge cake that is frosted with chocolate buttercream and then rolled into a cylinder. The outside is then covered with more chocolate buttercream or another dark frosting, like ganache, and decorated to resemble a wooden log found in the forest, often with such accoutrements as a dusting of powdered sugar to represent snow, meringue mushrooms, a scattering of winter berries and even fondant ivy leaves or pine cones.

At least one “end” of the log—and commonly both—are left open to show the spiraling cake and frosting inside and to complete the look of the dessert as a large piece of wood that was been sawed or chopped to its current size. Many variations on this basic recipe exist, however, and even at-home bakers often try such alternatives as chocolate, coffee or even pistachio cake, as well as espresso- or fruit-flavored fillings.

Many of Paris’s top patisseries have stopped producing traditional Buches de Noel in favor of more avant-garde versions of the Christmas dessert. For example, this year Dalloyau offers such variations as Madagascar chocolate with hazelnuts and orange zest, and a caramel and rum cake with vanilla filling; Laduree is selling buches of rose, strawberry and lychee; vanilla, lime, pineapple and rum; and pistachios with strawberries; La Patisserie de Reves offers yule logs of vanilla cake with sea salt and vanilla foam, and a “black and white” chocolate and vanilla-filled cake; while Pierre Herme has produced a truly unique mandarin orange buche that uses every part of the fruit, including its peel, as well as a yule log of passion fruit, cream cheese and toasted meringue.

And they all look mouth-wateringly delicious! 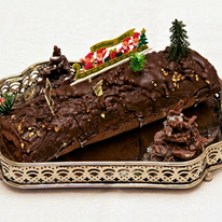 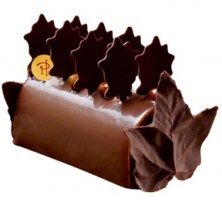 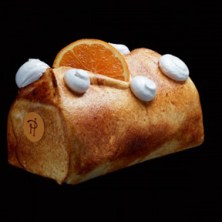 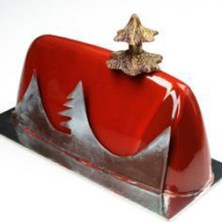 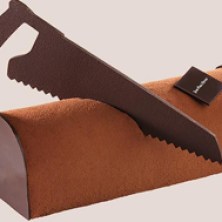 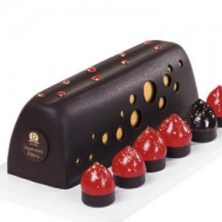 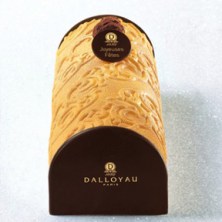 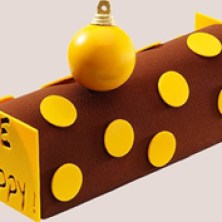