The decision to create the fountain around a musical theme was made largely because the offices of the Institut de Recherche et Coordination Acoustique/Musique (IRCAM), an international center for musical research, are located near—some even under—the fountain.

Stravinsky composed more than 100 pieces in the early to mid-20th century, including eight opera and theater works, 12 ballets, 22 orchestral works, four concertos, 14 choral pieces, 12 piano pieces and dozens of vocal and chamber works. He is best known for three of his ballets: “The Firebird,” “Petroushka” and “The Rite of Spring.” The Paris fountain that honors the composer was created in 1983 by Swiss artist Jean Tinguely, known for his kinetic-art pieces, and his wife, French sculptor, painter and filmmaker Niki de Saint Phalle. (The fountain’s pieces easily can be linked to each artist: the black mechanical pieces were crafted by Tinguely, the colored works by Saint Phalle.)

Initially, the fountain was named “Le Sacre du Printemps (Rite of Passage)” after one of Stravinsky’s most well-known pieces, but was later renamed to honor the composer’s wider musical contributions. The 580-square-meter basin is ornamented with 16 pieces of sculpture and water-movement installations that represent 16 of Stravinsky’s works (the fountain’s pieces easily can be linked to each artist: the black mechanical pieces were crafted by Tinguely, the colored works by Saint Phalle): “I wanted [it] to have charm, with the colors of Niki, the movement of the water, and a certain attachment of the heart that I gave to my sculptures,” Tinguely told Beaux Arts magazine in 1983 of his vision for the fountain. “I didn’t want artifices of color in the California style, with jets of water that were electronically controlled, things mysterious and bizarre. I wanted sculptures like street performers, a little bit like a circus, which was at the heart of Stravinsky’s style itself …”

The Stravinsky Fountain was dedicated on March 16, 1983.

Open to the public 24/7, the Stravinsky Fountain is located at Place Stravinsky, just south of the Pompidou Center (Metro: Rambuteau/Hotel de Ville). 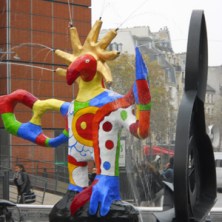 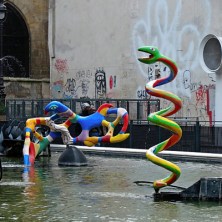 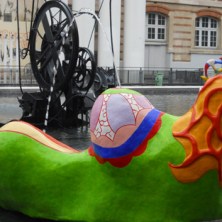 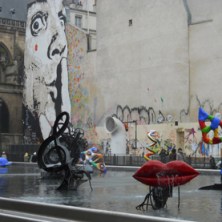 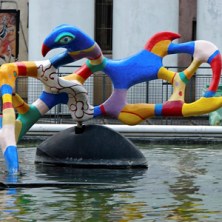 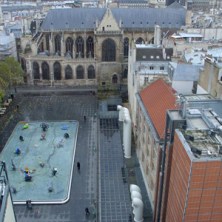