Many tourists in Paris make a trip to gorgeous Jardin du Luxembourg in the 6th Arrondissement to admire its exquisite landscaping, children playing with toy boats on its circular basin, more than 100 statues and other monuments scattered throughout the park’s nearly 57 acres and the ornate Luxembourg Palace, which today serves as home to the French Senate.

One of the true gems of the Luxembourg Gardens, however, is not as frequently visited—the stunning Medici Fountain.

The Medici Fountain, built in 1630, is one of the most beautiful monumental fountains in all of Paris. But its off-to-the-side location in a somewhat secluded nook of the park and the fact that it can be difficult to spot through the grove of tall trees surrounding it means that many park visitors inadvertently miss it. And that’s a shame, because besides being exquisite (and making for great photographs!) the Medici Fountain is deeply rooted in France’s rich history.

The fountain was built to adorn the grounds of the Luxembourg Palace, a private residence constructed from 1623 to 1630 for Marie de’ Medici, the widow of King Henry IV. Medici had the palace, gardens and the fountain crafted in the Italian Renaissance style of architecture to honor her roots in Italy’s dynastic Medici family. Architect Tommaso Francini, the intendant general of waters and fountains to the royal court, was tapped for the design and construction of the new fountain, and he crafted a large water-filled basin leading up to an enormous carved fountain, which was topped with statues of two nymphs pouring water from pitchers.

The fountain was considered a marvel of its time, particularly for Paris’s Left Bank where there had been no free-flowing water in the quarter until the construction of an aqueduct in 1623; until then, all water supplies for the Left Bank had to be carried by hand from the Seine River. (This lack of flowing water also was the main reason that most of Paris’s urban growth up until the early 1600s occurred on the Right Bank, where the underground water table was much more easily accessible.) After Medici’s death, the palace and gardens went through a series of owners. By the middle of the 18th century, the entire property—including the fountain—had fallen into serious disrepair. The neglect was so severe that the fountain’s statuary were missing (possibly stolen) and the supporting wall behind the structure was so badly eroded that it was nearing collapse.

Fortunately, Napoleon in 1811 directed architect Jean Chalgrin, who created the Arc de Triomphe, to repair the historic fountain and the nearby Luxembourg Palace.  And just 50 years later, fountain was again updated when it had to be moved about 30 yards to make room for the construction of the Rue de Medicis, one of the major projects launched by Baron Haussmann, the urban planner directed by Napoleon III to completely gut medieval Paris and create a modern, elegant capital city. Moving the Medici Fountain required that a new rear support structure be created, but architect Alphonse de Gisors decided that instead of building a new wall he would instead install a second fountain, the Fontaine de Leda, back-to-back against the Medici structure to provide . (Very few Luxembourg Gardens visitors today are even aware of the Leda Fountain’s existence, and as such it is rarely seen.)

Gisors also made several other changes to the Medici Fountain, including installing two new statues representing the rivers Seine and Rhone near the top of the fountain where the original nymph likenesses had been placed; introducing a new group of bronze and white-marble statues by Auguste Ottin; prominently displaying the coat of arms of the Medici family; and installing statues on either side of the fountain’s facade representing a faun and a huntress. It was Gisors who also was responsible for planting the thick grove of trees that today shade the long basin leading to the fountain.  And while quite scenic, this thicket unfortunately tends to hide the Medici Fountain from those taking casual strolls through the Luxembourg Gardens, particularly in the summer when the trees are in full bloom.

As a result, many park guests simply walk by without realizing they’ve missed one of the truly great examples of the beauty of Paris. 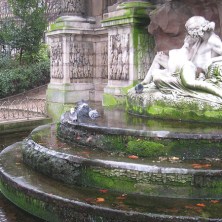 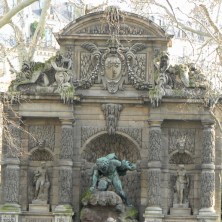 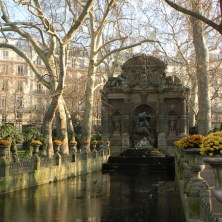