Home » Food » Why You Should Opt for the Croissant au Beurre Breakfast in Paris? It’s time for a croissant, bien sur!

But don’t make the mistake that many visitors to the City of Light make when popping into one of Paris’s many fantastic boulangeries/patisseries and simply ordering “un croissant.”

Specifically ask the shopkeeper for the croissant au beurre. So don’t think about saving money when you’re grabbing your petit dejeuner at a local boulangerie, like the one pictured below, Maison Landermaine, one of the most beautiful in all of Paris (at the corner of Boulevard Beaumarchais and Rue de Pasteur Wagner). Shell out the few extra centimes for the croissant au beurre. You definitely will not be disappointed. And one quick note that’s applicable now during the autumn and winter of 2017: There’s currently a rather severe butter shortage in France, due to supply and demand fluctuations for dairy products caused by EU regulation changes in 2015. As such, butter–especially high-quality butter–is in short supply throughout Europe, but particularly in France. Some claim the shortage is the worst since World War II. So until it eases, those butter-based croissants and other pastries might be even more expensive than usual. Pay the extra price. It’s well worth it. 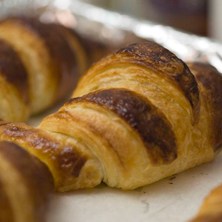 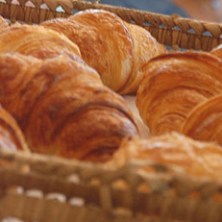 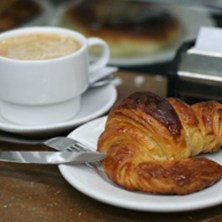