One of my favorite green spaces in the Marais is the tranquil Jardin Saint Gilles Grand Veneur-Pauline Roland, a roughly 1,000-square-meter park that is among the most secluded spots in the City of Light, mostly because the park is nearly impossible to find.

The garden, particularly enjoyable in late spring when the hundreds of pink, red and white rose bushes and covered trellises are in full bloom, is tucked into a courtyard between several large stone buildings, including the gorgeous Hotel Grand Veneur, a large mansion built in 1637 for Vincent Hennequin, Duke d’Ecquevilly, who served as the captain of the king’s huntsmen. There are two entrances to the park near the Chemin Vert Metro station in the Marais–one on Rue des Arquebusiers and the other on Rue Villehardouin, both via archways through the surrounding buildings that provide access to the courtyard. Oddly, the garden itself isn’t visible through either entry port—you have to walk through the archways and take a sharp turn to even see the park, so it’s very easy to miss, even when expressly looking for it.

But once inside, visitors are treated to one of the most comforting—and quietest!—spaces in all of Paris. The surrounding buildings completely muffle the sounds of the city outside: The only traffic noises one can hear at all are police or emergency services vehicles, and then only if they’re very nearby. Otherwise, the space is filled with the sounds of chirping birds, the breeze ruffling the leaves of the garden’s trees and shrubs, and the peal of the bells every half hour from the nearby Saint-Denys-du-Saint-Sacrament church. There are several park benches surrounding the garden’s four “lawns,” each of which is framed with green metal trellises covered with climbing rose bushes. And the entire green space is ringed with lush maple trees that provide cooling shade in the summer and a wonderful show of autumn colors each fall.

The park was named after Saint Gilles, a Greek saint who spent much of his life in the Provence region of France during the late 7th and early 8th centuries, and Pauline Roland, a renowned French feminist and one of the nation’s first Socialist Party members. In the mid-1800s, she established the Association of Socialist Teachers, which stressed the importance of equal education for both boys and girls.

The Jardin Saint Gilles Grand Veneur-Pauline Roland is open daily beginning at 8 a.m. weekdays and 9 a.m. on weekends. The park closes at dusk each evening. 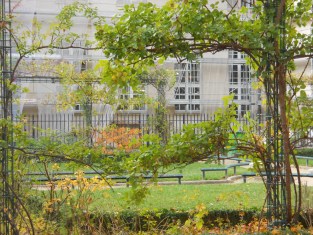 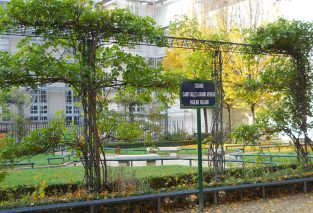 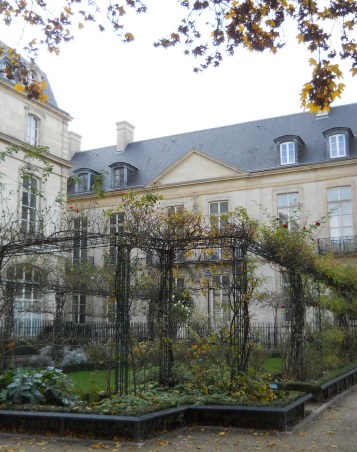 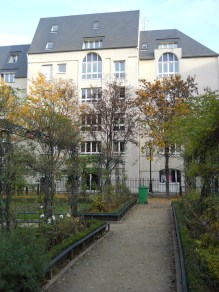 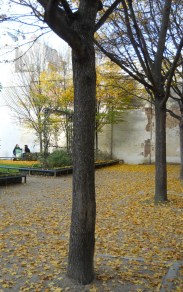 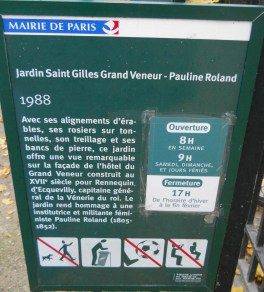