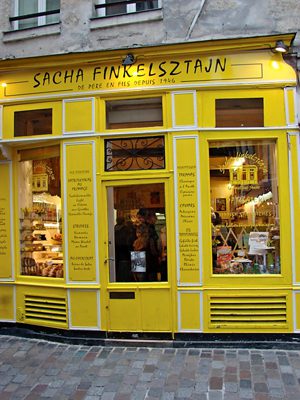 Prior to World War II, the Marais was the center of Jewish life in Paris and the Rue des Rosiers (Street of the Rose Bushes) was the heart of this Jewish enclave. But much has changed in the old Jewish quarter over the past 70 years. The street now boasts considerably more trendy and overpriced boutiques (even a number of international chain stores) than Jewish businesses. But there are still remnants of Paris’s once-thriving Jewish district along the five block-long street and its adjacent lanes: the Agudath Hakehilot orthodox synagogue, Judaica bookstores Librairie Bibliophane and Diasporama, and a number of kosher restaurants and delis. A must-stop destination among these is Sacha Finkelsztajn, a bakery and delicatessen dubbed by locals as La Boutique Jaune (the yellow shop)—so-named because of its bright yellow facade—that’s been operated by the same family for nearly 60 years. END_OF_DOCUMENT_TOKEN_TO_BE_REPLACED 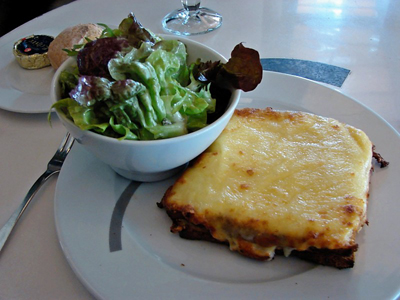 As anyone who has visited Paris knows, a very popular lunchtime meal at cafes and smaller eateries in the City of Light—and indeed throughout all of France—is the croque monsieur, a toasted ham and cheese sandwich that is one of the true staples of simple French cuisine. But how did it become such a famous French dish and land on the menus of countless casual restaurants? No one knows for sure, but a commonly accepted story involves a brasserie on Paris’s Boulevard des Capucines, a shortage of baguettes for that day’s lunchtime crowd, and the presence of the neighborhood butcher in the eatery when a patron asked about the newly created sandwich. END_OF_DOCUMENT_TOKEN_TO_BE_REPLACED