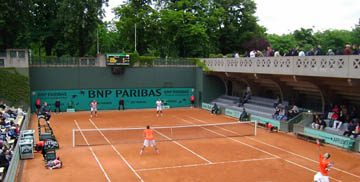 As the 2014 French Open tennis tournament enters day three today, I can’t help but remember my attendance at the 2010 French Open, held in late May-early June at the Roland Garros facility in Western Paris. With the help of my temporary landlord, I bought and printed out a day pass to the outer courts, and was able to attend two junior matches involving American teenagers (they both lost) and a doubles match featuring a highly seeded French team (they won). I also sat for a bit in the courtyard outside Court no. 1 (the third-biggest of the courts in the complex) and watched on a Jumbotron as Serena Williams dispatched her opponent. It was amazing! END_OF_DOCUMENT_TOKEN_TO_BE_REPLACED