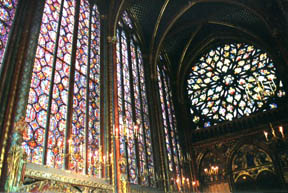 It’s Easter weekend in Paris—called Paques in French. And visitors to the City of Light can enhance their appreciation of the role of Catholicism in the history of Paris through all of the fine art and architecture that can be seen via the city’s 125-plus churches. One of the very best of these—and a must-see destination for first-time visitors—is the dazzling Sainte Chapelle, located just a few blocks from its more famous cousin, Notre Dame. END_OF_DOCUMENT_TOKEN_TO_BE_REPLACED

Straddling the eastern tip of Ile de la Cite just behind Notre Dame is the Memorial de la Deportation, a tribute to the more than 200,000 French men, women and children—including homosexuals—who died in Nazi extermination camps during World War II. The memorial is a poignant reminder of the role racism, antisemitism, homophobia and flat-out hatred played in the deaths of nearly 50 million people worldwide during WW II. END_OF_DOCUMENT_TOKEN_TO_BE_REPLACED

There are many beautiful churches in Paris, and I may even be persuaded to admit that Sainte Chapelle and Saint Eustache are more grand and glorious, but nothing beats Notre Dame’s position along the Seine on the gorgeous Ile de la Cite. From the gargoyles to the massive stained-glass windows to the iconic towers and flying buttresses, Notre Dame is a complete delight. END_OF_DOCUMENT_TOKEN_TO_BE_REPLACED